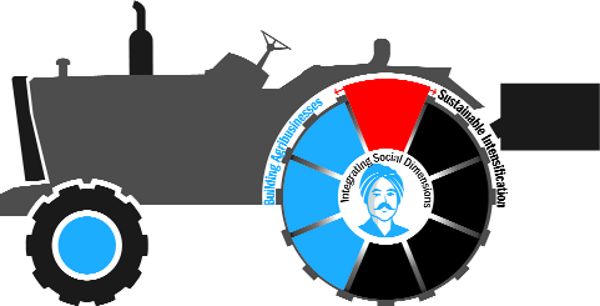 Agriculture Minister Narendra Singh Tomar recently informed Parliament that the Department of Agriculture & Farmers’ Welfare (DoAFW) was going to create a National Farmers Database or ‘Agristack’, a collection of technologies and digital databases focusing on India’s farmers and the agricultural sector.

Agriculture Minister Narendra Singh Tomar recently informed Parliament that the Department of Agriculture & Farmers’ Welfare (DoAFW) was going to create a National Farmers Database or ‘Agristack’, a collection of technologies and digital databases focusing on India’s farmers and the agricultural sector. The database, which will include farmers’ digitised land records, is purported to help offer proactive and personalised services to farmers, increase their income and improve the efficiency of the agriculture sector. The Central Government had formed the Committee on Doubling Farmers’ Income in 2016; it submitted its 14-volume report in 2018. The creation of a dynamic farmers’ database is mentioned in one of the volumes.

The DoAFW had floated the India Digital Ecosystem of Agriculture (IDEA), which was to seek feedback from parties concerned. Now, ‘Proofs of Concept’ (PoCs) based on data from the federated farmers’ database for certain chosen areas have been invited. If any of the PoCs (pilot) turns out to be beneficial for the farmers, the database is expected to be scaled up to the national level.

Farmers and some farm organisations have raised objections to IDEA, as there is lack of farmer representation in the existing task force. They are equating this process to the way the three farm laws were introduced last year, with farmers not being consulted. A proactive approach is always better than a reactive one.

Another objection is regarding the linking of the financing of the states by the Central Government to the implementation of the project. There are other concerns as well; for example, privacy of the farmers’ personal details in the database.

The DoAFW should consider the digital divide between rural and urban areas. According to a survey conducted by the National Sample Survey Office (NSSO), between July 2017 and June 2018, just 4.4% rural households had a computer against 14.4% in an urban area. Only 14.9% rural households had access to the Internet against 42% households in urban areas. Not all farmers have a smartphone. Thus, if launched, most farmers will not be able to enjoy the purported benefits of the national database.

Since one of the purposes of the proposed database is to double farmers’ income, I wish to comment on the report prepared by the Committee on Doubling Farmers’ Income (DFI).

Ashok Dilwai, chairman of the committee, introducing the report, wrote on the website of the Department of Agriculture & Farmers’ Welfare: “Dear Citizens, I am happy to share with you the Report of the “Committee on Doubling on (sic) Farmer’s Income” prepared in 14 Volumes… The above volumes may be downloaded for review by all interested stakeholders.

With great optimisation of an Income Revolution for India’s farmers...”

Volume 8 has four sub-volumes. The smallest volume is No. 10 (‘Risk Management in Agriculture’; 124 pages) and the largest is No. 8D (‘Production Enhancement through Productivity Gains’; 333 pages). Altogether, the 14 volumes have 3,156 single-spaced pages. The biggest stakeholders are the farmers. How can anyone expect farmers to read and digest information from 3,156 pages full of bureaucratic jargon? Let alone farmers, I doubt if many agricultural scientists and policy-makers have read all these volumes.

In Volume 12 (‘Science for Doubling Farmers’ Income’), the committee stated, “At the national level, the priority areas to target doubling of farmers’ income, though Science and Technology could be:

a. Farmers’ database — as recommended in Volume 13, to build a dynamic database and ensure targeted and efficient delivery of support to farmers, and to assist specialised extension services.

d. Extension system — to standardise information, integration of effort among stakeholders and maximise coverage to reach all farmers.

The committee listed the following five as essential ‘pillars’ for doubling farmers’ income and sustaining a steady income growth in the long run: increasing productivity as a route to higher production; reduced cost of production/cultivation; optimal monetisation of the produce; sustainable production technology; risk negotiation all along the agricultural value chain. You don’t need a committee to come up with such obvious interventions.

Agricultural scientists have continually pointed out that crop productivity has reached a plateau for various reasons, especially in the food-bowl states of Punjab, Haryana and western UP, where, encouraged by governmental policies, the rice-wheat monoculture has been prevalent for the past 50 years. While costs of agricultural inputs have been increasing significantly year after year, farmers have been getting only incremental increases in the minimum support price (MSP) for the two crops. The Swaminathan Commission made a modest recommendation of providing MSP of 50% over and above the total input costs incurred by the farmer. This has not been done. In addition, sorely needed crop diversification has remained elusive despite the fact that the water aquifers in the food-bowl states are running dry because of the rice-wheat monoculture.

Merely the creation of a national database is not going to double or enhance farmers’ income. Here are some suggestions to enhance their income: