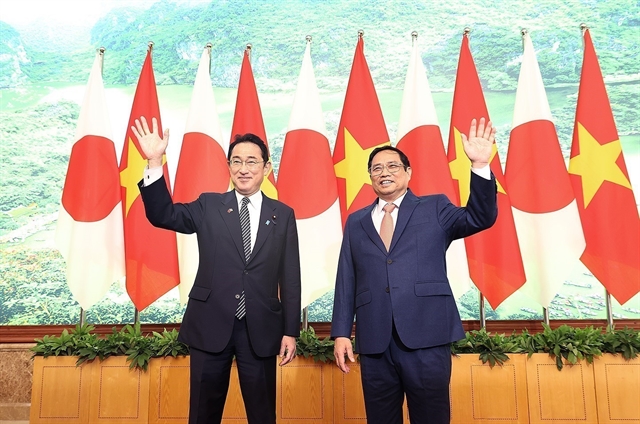 Prime Minister Phạm Minh Chính and his Japanese counterpart Kishida Fumio before their talks held in Hà Nội on May 1. — VNA/VNS Photo

The diplomat told the Vietnam News Agency (VNA) that the official visit was significant as it marked a milestone in the relationship and affirmed the resolve of the two countries’ leaders to open up a new page of the “Extensive Strategic Partnership for Peace and Prosperity in Asia” between Việt Nam and Japan.

Their good personal sentiments are likely to create a firm foundation for the long-term development of the friendship and cooperation between the two countries and peoples, according to Nam.

Economic cooperation was the main focus of the talks between the leaders, he said, adding that a total of 23 important documents were reached during the visit, covering economy-trade, science-technology, transportation, digital transformation and innovation.

The two sides laid an emphasis on priority cooperation spheres – the diversification of sources of supply, digital transformation and technological renovation. The Japanese government pledged to support 39 firms operating in these fields.

In their meetings, both Vietnamese and Japanese leaders affirmed the significance of 2023 as the year marks the 50th anniversary of the bilateral diplomatic ties, and agreed to establish national organising committees in charge of holding major celebration events.

Regarding political security, they consented to continue their close coordination at regional and international forums like the Association of Southeast Asian Nations (ASEAN), the East Asia Summit (EAS), the Asia-Pacific Economic Cooperation (APEC), the Asia-Europe Meeting (ASEM), the United Nations and the Mekong-Japan cooperation.

The sides touched upon their common views on the settlement of disputes and differences by peaceful measures, including the respect for diplomatic and legal processes, and in accordance with international law, particularly the 1982 United Nations Convention on the Law of the Sea (1982 UNCLOS).

They also highlighted the comprehensive, full and effective implementation of the Declaration on the Conduct of Parties in the East Sea (DOC), soon reaching an effective and substantive Code of Conduct (COC) in line with international law.

The leaders were resolved to soon bring Vietnamese longan to Japan, paving waves for other fruits such as grape, grapefruit, avocado and rambutan to access the market.

The ambassador held that the Vietnamese and Japanese economies had become increasingly reciprocal, and the number of Japanese firms in Việt Nam was expected to rise in the time ahead.

To promote the bilateral ties, Nam stressed the need for the two countries to step up the communication work to educate their young generations about the heartfelt and trustworthy relationship. — VNS